Many years ago, in Tohwadong of Hwangju, a poor blind yangban (literati) named Shim Hakkyu lived with his wife. For many years they wished for a child but, try as they might, their efforts were in vain. After quite a bit of time had passed, and with many years of prayer and faith, finally his wife gave birth to a beautiful baby girl. However, happy as they were, his wife was too weak in her old age after childbirth and passed away, leaving him to raise their daughter alone. From a young age, this girl grew to learn to endure many hardships; she accompanied her father when he went to beg for alms, and was as devoted a daughter as one could ask for.

Her name was Shim Cheong. 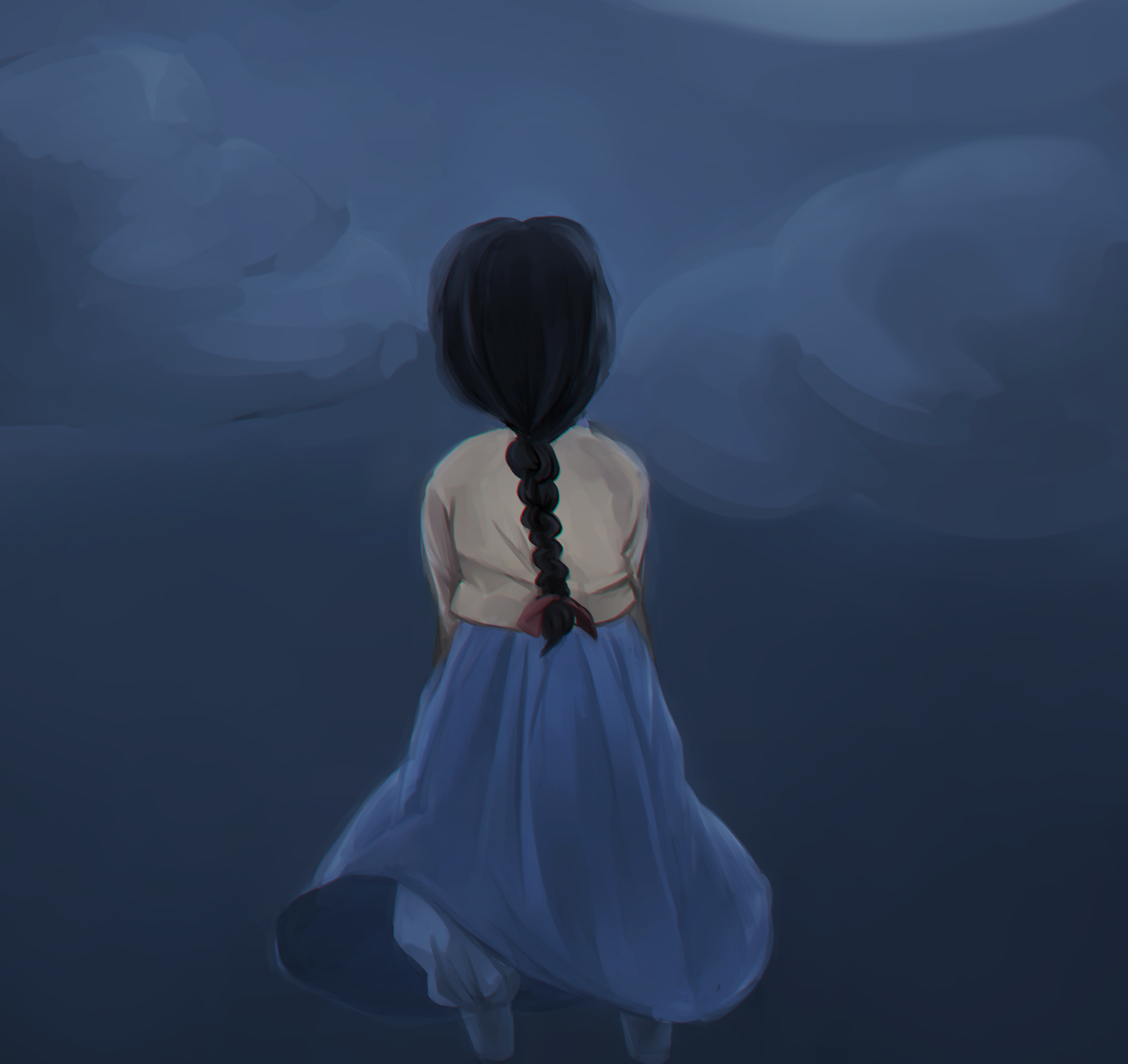 One day, Old Man Shim was out alone begging for alms and he stumbled into a deep irrigation ditch. As he was foundering in the water, trying vainly to climb out, bemoaning his bad fate and his handicap, he heard a voice speak to him from above. “Old man,” it said, “I have heard you lamenting about your blindness. If you will give 300 sacks of rice to my temple as a tribute to the Lord Buddha, we will offer up our prayers to return your sight.” Gentle but firm hands that seemed to reach down from the heavens themselves took hold of Old Man Shim’s trembling arms and pulled him from the water. Shim was so thankful and so full of hope that he momentarily forgot his dire circumstances, and without thinking he blurted out, “Thank you kind monk. Thank you! I will give you those 300 sacks of rice! I swear it!”

It wasn’t until much later, when his elation had worn off, that Old Man Shim had the terrible realization that he did not have the means to offer three bowls of rice—let alone 300 sacks—to the temple.

“Shimchong-ah,” he said to his daughter that evening, recounting his misfortune. “What shall I do? I was filled with gladness and the world seemed bright to me. Other men jostle me out of the way or steal my alms from out of my hands but the monk was kind. All I wanted was to return his kindness, and look what I have done. What terrible thing will befall us if I have offended the Buddha?”

That night Shimchong lay on her thin bed mat unable to sleep, worrying about her father’s promise to the monk. She could think of no way to raise the 300 sacks of rice as tribute to the temple, no matter how much she pondered it, and by and by she drifted off into a restless sleep.

In her dreams, her mother appeared and told her how she might get the rice for her father. “Go to the harbor,” she said. “There you will find a merchant looking for a young maiden. Go with him and he will provide the 300 sacks of rice.”

It just so happened that the Dragon King of the East Sea was displeased with the merchant fleet and had sent foul weather and storms that had sunk ship after ship on its way to China. To appease the Dragon King, the merchants needed to sacrifice a beautiful maiden, but as of yet they had found no family willing to sell a maiden daughter. So when Shimchong appeared the next dawn and offered herself in exchange for the tribute for her father, the captain of the merchant fleet was more than happy to accept.

The 300 sacks of rice were taken to the temple and the prayers to the compassionate Buddha were offered up as agreed, but Old Man Shim did not immediately regain his sight as he had hoped. The monks said that it would not simply happen overnight. Now Old Man Shim was not only poor and blind, but had lost his only daughter.

The sea was calm at the beginning of the voyage, but soon the sky grew gray and ominous. The water, at first, was only choppy, but then the sea boiled as if the Dragon King were thrashing his massive body beneath the waves. Lightning flashed from the dark clouds and the wind ripped at the sails. Oars and anchor chains snapped in the violent sea.

The merchant captain brought Shimchong out of the hold, dressed up in brightly-colored bridal finery. Although Shimchong told him that she would leap into the waves of her own will, he did not believe her, and he had her hands and feet securely bound. The sailors all wept copiously with their admiration for her bravery and her filial virtue as Shimchong said a quiet prayer and leapt overboard into the ocean. And just as she disappeared under the waves, the violent seas grew calm. 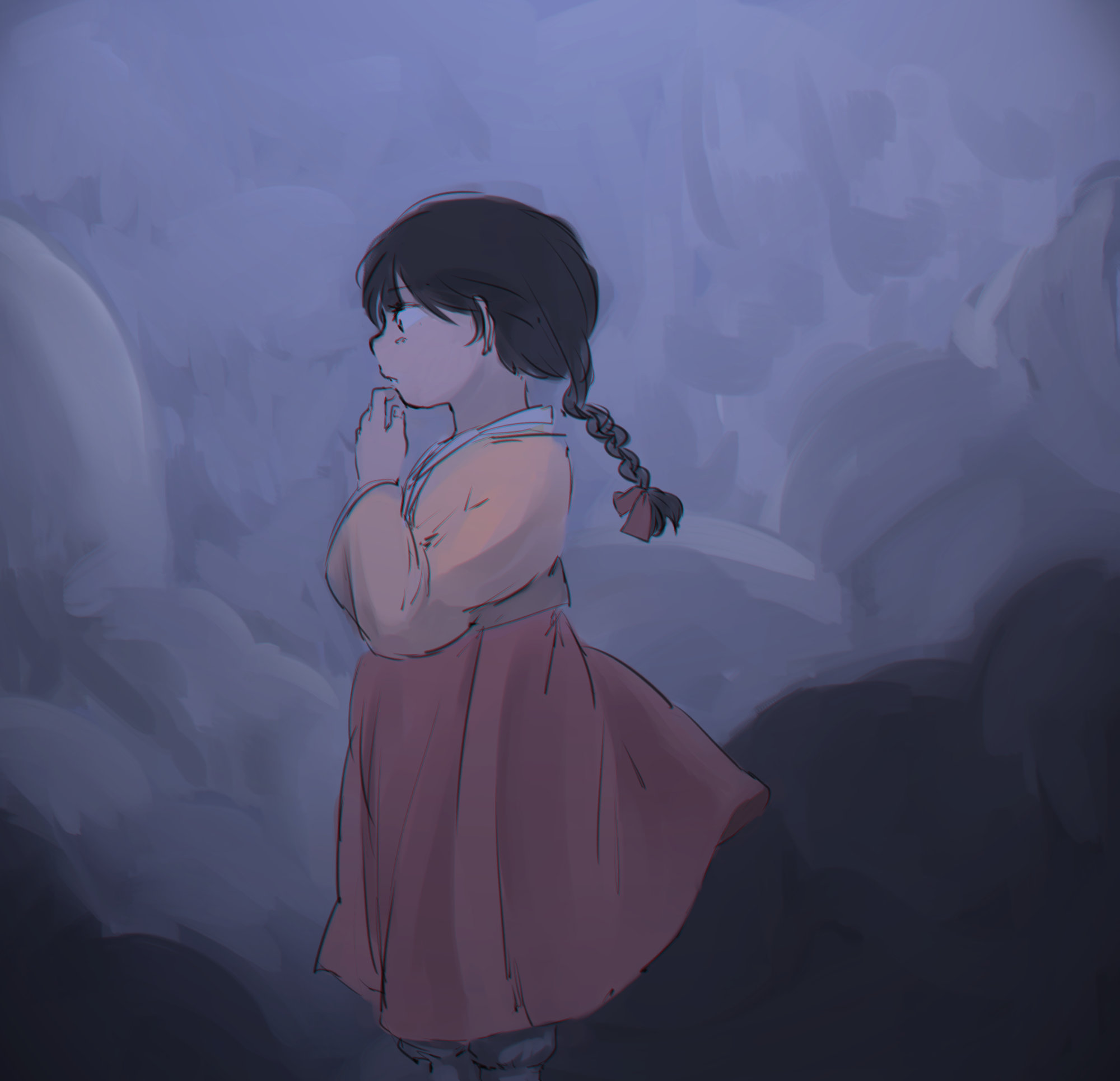 Shimchong descended into the cold water. As she sank deeper and deeper, the water around her grew suddenly bright with light and she found that she could breathe. She looked around her in wonder as the minions of the Dragon King approached her, released her from her bonds, and escorted her to the magnificent underwater palace.

And there she dwelled, happy, for it is said that the spirit of her mother also dwelt there. But after a time she was homesick for the world of the surface, and she longed to see her dear father again. Her cheerful demeanor grew sad, and it came to the notice of the Dragon King, who called her to him one day and said, “I cannot bear to see your unhappiness any longer, Shimchong. I have seen that your filial piety and your selfless devotion are far greater than that of any other mortal I have known. It touches my heart to see your concern for your poor father, so as a reward for your devotion, I will send you back up into the world above.” And with this the Dragon King transformed Shimchong into a giant lotus flower. 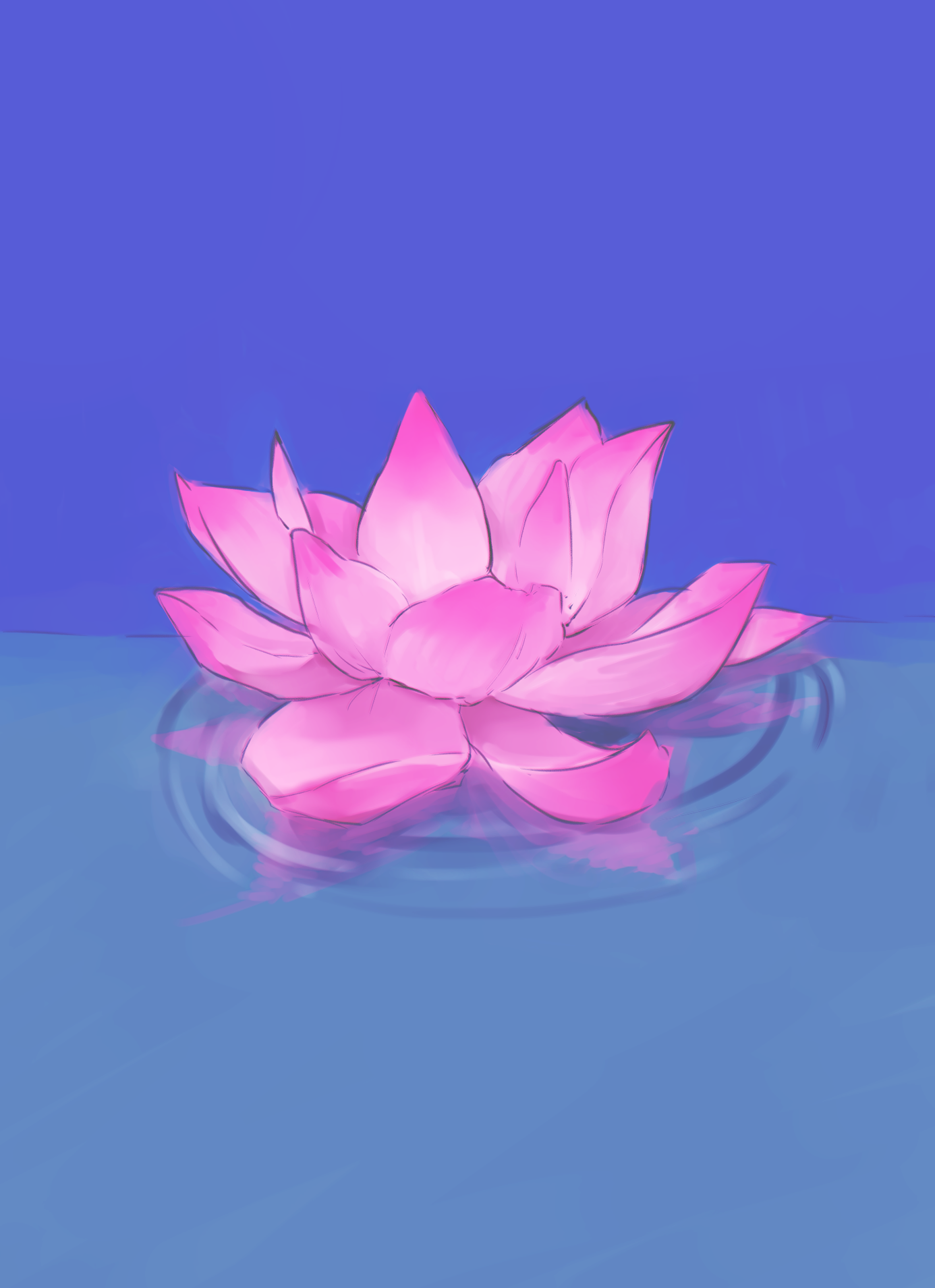 4: The King and the Lotus

So it happened that a giant white lotus blossom was found at the mouth of a river along the coast, and the local fisherman, awed by its beauty, decided to make it a gift for their king. The King was recently widowed, and known to be in a deeply mournful state of mind. They hoped the bright flower would lift his spirits.

When the King first beheld the flower, his eyes lit up in wonder. He rewarded the fishermen handsomely and had the lotus installed in its own special room where he would stand for hours each day in a melancholy mood, admiring its beauty. Each night Shimchong would emerge from the blossom, and at the crack of each dawn she would disappear into it again. Time and seasons passed and the King’s love for the flower did not wane.

One moonlit night the King was restless, and as he wandered the palace he found himself, by and by, at the chamber of the lotus flower. He stepped inside to gaze upon the lotus in the moonlight, but what he saw was far more wonderful—a woman so beautiful it took his breath away. “Who are you?” he said. “Are you a ghost come to bewitch me, or are you real?”

“It is only I,” said Shimchong. “It is I who live in the giant flower.” Out of modesty, she tried to hide herself, but when she turned, she found the lotus flower had vanished.

And this is how Shimchong came to be the King’s bride. There was a magnificent wedding, and they passed their days together in great happiness, but the King sensed a great sadness about his new Queen. One day he found her weeping in the garden. “My dear wife,” he said, “I cannot bear to see your tears. Tell me your wish—any wish—and it shall be granted.”

“There is only one thing I desire,” Shimchong replied. “Let there be a great public banquet to celebrate our marriage, and let all the blind men of the Kingdom be invited to partake of the feast. That is what will make my heart glad.” 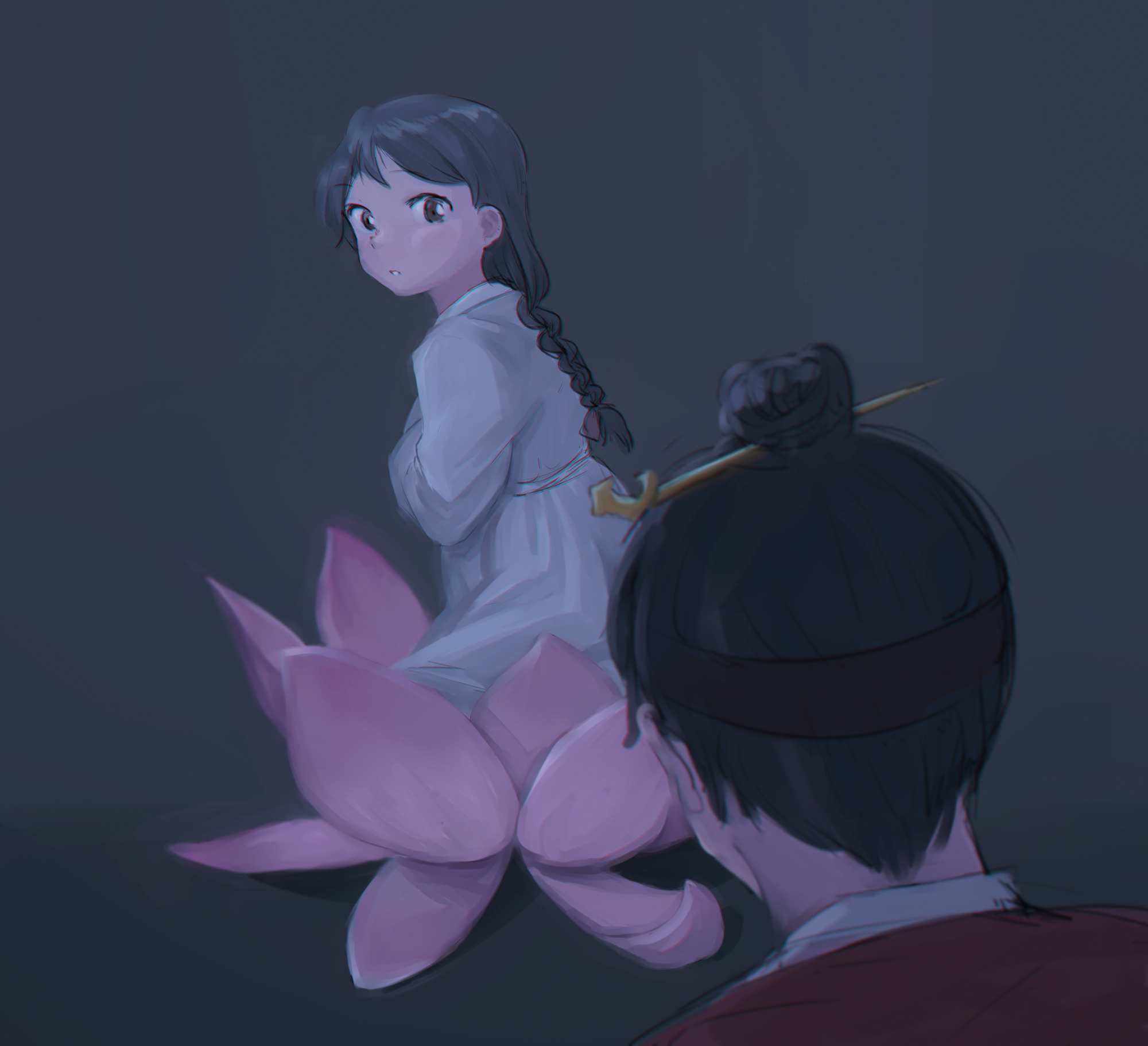 The King honored his Queen’s strange request, and so from far and wide, from all corners of the kingdom, the blind beggar men were invited to a banquet to celebrate the wedding. For three days they came to drink and to dine on fine foods, and each day the new Queen watched from behind her gauzy silk curtains, hoping that the next blind man might be her father. But it was to no avail.

On the last day, as the gates were closing and the Queen had turned forlornly away, a loud racket was heard outside. The servants were turning away a blind beggar who had arrived too late. And just as the gates were closing, the Queen happened to glance backwards to see that under the dirt and dust of his long journey and under the tatters of his rags, the old man was none other than her father. “Father!” she cried. “Father! It is my dear father! Let him in!”

Old Man Shim staggered inside, nearly losing his balance from the shock of hearing the familiar voice. “Aigo! Shimchong-ah!” he called. “Is it a ghost or have the dead come to life? My daughter! Is that your voice I hear? Let’s have a look at you, girl!”

Once again, in his enthusiasm, Old Man Shim forgot his circumstances. He opened his eyes wide, oblivious to his own blindness, and when he did so he found that he could suddenly see. Before him was his daughter, more beautiful than he could have imagined. Shim wept with joy and embraced her, and she, too, was tearful with joy. Soon there was a happy commotion throughout the palace, and it is said that every blind man there who wanted to have a look at Shimchong, the filial daughter, had his vision restored that day. 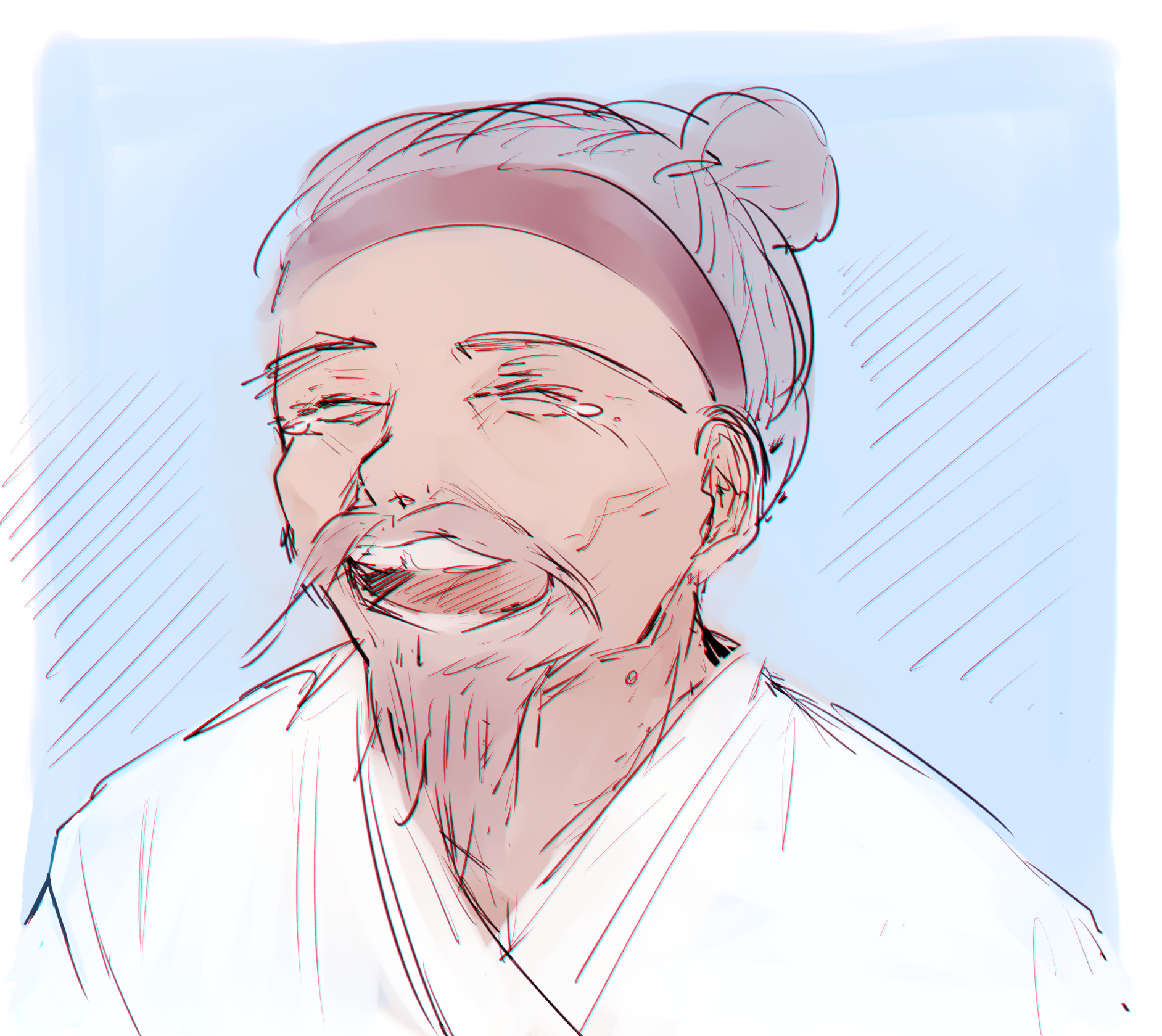